By Nines Licad November 13, 2013
It's been a number of months since I visited Ikkoryu Fukuoka Ramen at SM Aura where I devoured a steaming hot bowl of one of their bestsellers, the Ajitama Tonkotsu. 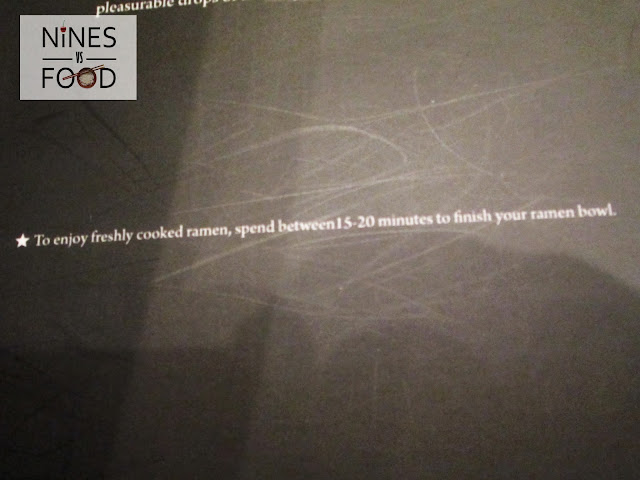 During my first time eating at Ikkoryu, I didn't get the memo that I should be able to enjoy it to its fullest by eating it within a span of 15 to 20 minutes (Fun Fact #1). It was during my second time that I was able to see this tiny disclaimer on the first page of their menu.

So as soon as I got transferred to another job in Ortigas, I told myself to visit their first ever branch at the East Wing of Shangri-la Plaza Mall some time when my schedule permits me, even though it means walking an extra mile from my new office located at the central part of the Ortigas Business District. I did assume that making myself a bit hungry can increase the chance of finishing my food faster than usual (it takes forever for me to finish a meal - Fun Fact #2). 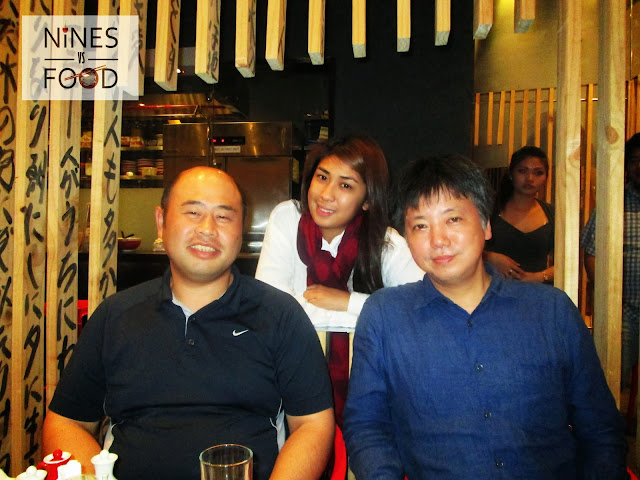 True enough, I had the chance of visiting the place, only, I get to dine with the people behind Ikkoryu Fukuoka Ramen. Here is a picture of me with ramen master Masanori Ogata, CEO of Y.S. Food; and Kenji Komuro, co-founder and currently Ikkoryu's Public Relations Director in the Philippines. It was my second time meeting Kenji, and my first time meeting Masanori, who had just arrived in Manila the day before. Fun Fact #3 - Masanori Ogata is the smiling guy that you will see on the Ikkoryu Fukuoka Ramen menu. The fact that he puts his face on the menu means that he is confident that you will get the best that Ikkoryu has to offer for your tastebuds. And yes, he does smile all the time, even in person :) 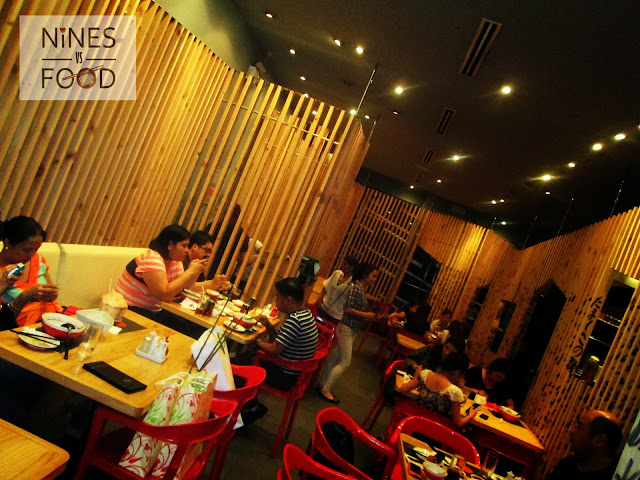 Not only was I able to get a preview of Ikkoryu Fukuoka Ramen's new tonkotsu concoctions, but I also got a decent seat on the house too. Fun Fact #4 - It's mostly packed at Ikkoryu Fukuoka Ramen Shangri-la, so it's always best to eat there if you have time to spare. Or if you're alone, you can opt to eat in front of their open kitchen, which I think is cool since you get to see Ikkoryu's chef and all his apprentices in action. 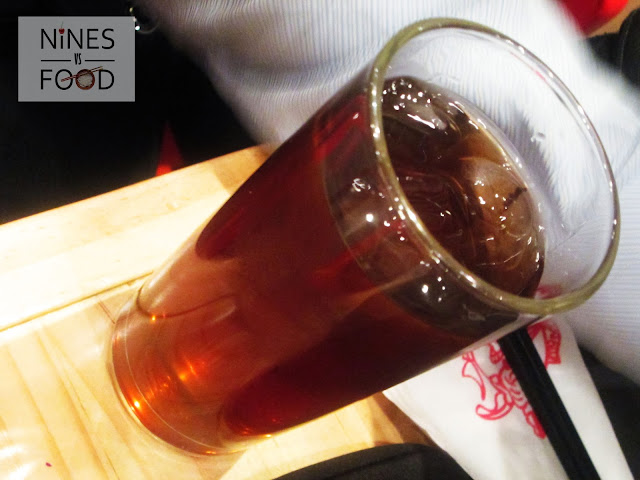 I was served with unlimited glasses of refreshing Barley Tea that's roasted and steeped, making it mild to the palate. Fun Fact #5 - according to Kenji, this drink is widely consumed in Japan compared to the usual tea made from roasted tea leaves. You can barely taste anything though, because it's not sweetened like the usual iced tea you get from fastfood joints and other restaurants. 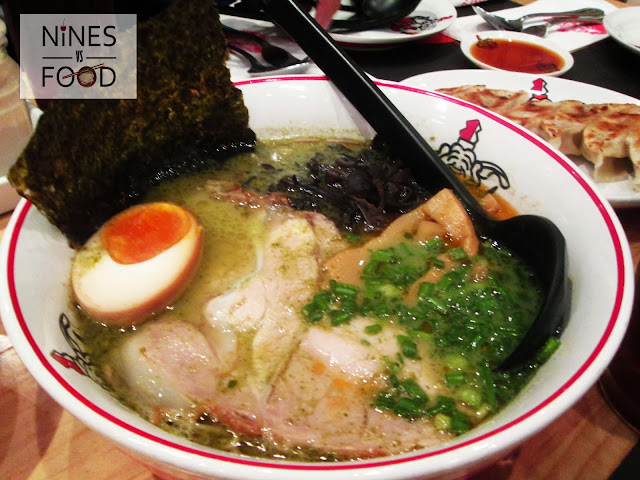 My ramen trip started with the Yuzu-tama Tonkotsu, the same perfected soup base from pork bones that's been cooked for hours and hours which results to an almost elixir-like liquid of ramen goodness. The only difference is that the Yuzu-tama was made with Yuzukoshō (or yuzu for short). Fun Fact #6 - yuzukosho is a fermented paste usually made with green chili, yuzu peel (a type of citrus) and salt. Thanks to wikipedia, it is said to have been originated in one of the towns of the Fukuoka Prefecture. As soon as I discovered that, no wonder that the guys Ikkoryu Fukuoka Ramen chose to add this on their current menu. 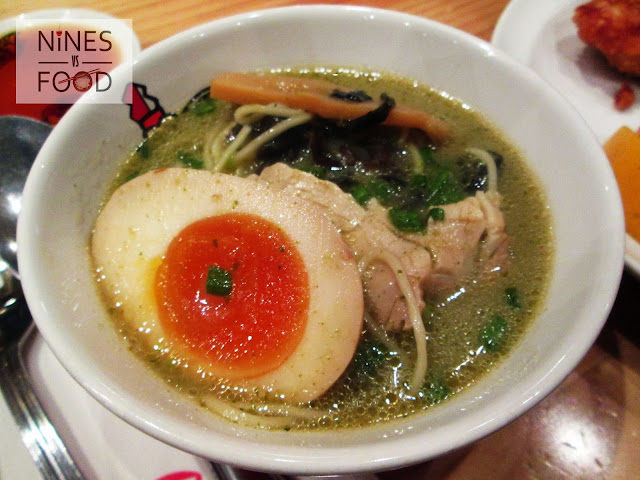 Thanks to Kenji's superb way of sharing it into smaller portions for everyone, I hurriedly tasted the flavorful warm broth. I am a big fan for spicy food so I liked it very much, but I admit this might just be a tad hot for the others. Surprisingly, after a while the heat mellows down and gives you a combination of slight tang and dominantly earthy flavors from the actual soup base. Overall, when eating it with the perfectly cooked noodles, egg and meat, I don't think it has the capacity to set your tongue on fire. 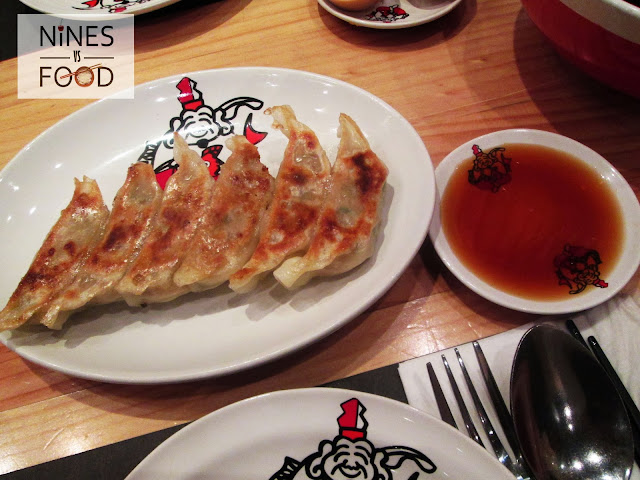 While I enjoy my first bowl of ramen, I was munching on Ikkoryu Fukuoka Ramen's freshly steamed and quickly fried Gyoza served with a mild soy sauce. Just like the noodles used in their different kinds of ramen, these dumplings should be consumed quickly so you won't lose the good quality of the dish, and I was more than happy to help out to eating more of it. 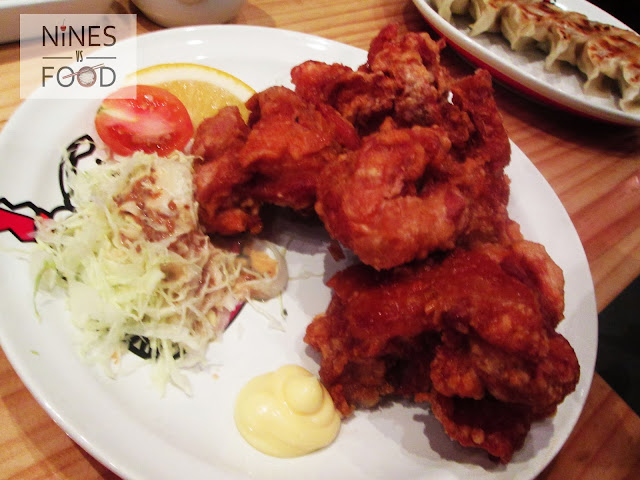 The Karaage (Fun Fact #7 - it is pronounced as ka-RAH-ge) is the Japanese' own version of fried chicken. Nothing much to explain with Karaage since this is a very popular cooking technique in Japan. Served with a refreshing slaw and a dollop of mayo on the side, this very tasty chicken is a good deal to order for two to three people. 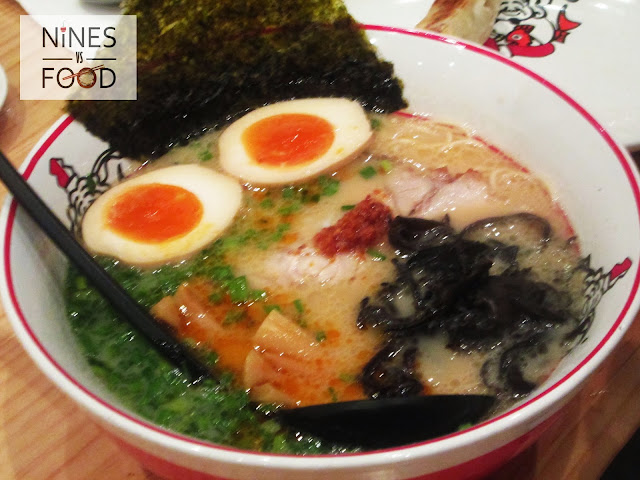 I have made a post about the Ajitama Tonkotsu Ramen before on this post so feel free to check it out so I won't be repeating myself over again. I already had my share of the Ajitama eggs from my first bowl and preferred to give it to those who want it. 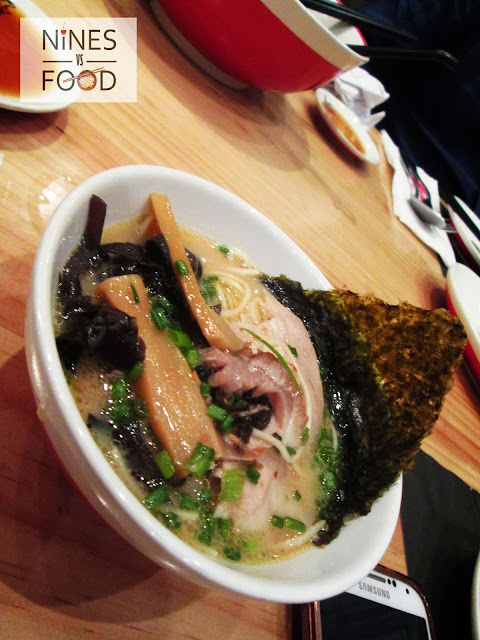 Thanks to Kenji for giving me this beautiful bowl of Ajitama Tonkotsu Ramen, as even in its smaller portion it still looked amazing. I preferred not to have another serving of Ajitama (egg) since I already got my share on my first ramen bowl earlier that night. 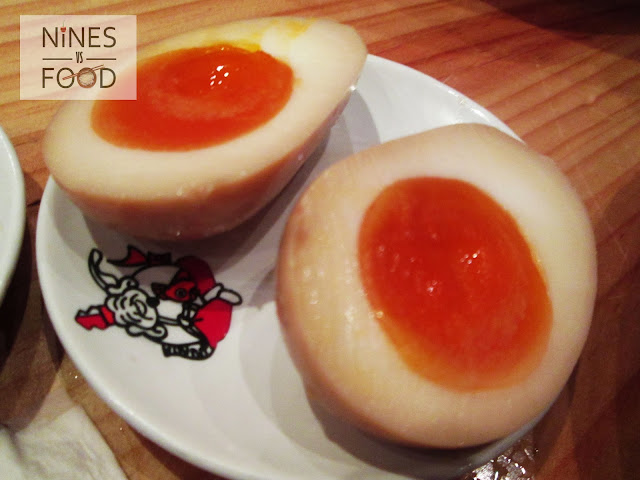 But just in case you can't get enough of those yummy slow cooked eggs, customers are free to order it separately.

Now, I am no ramen guru, but for me, the noodles at Ikkoryu Fukuoka Ramen is really something special, and it's one of the reasons on why I crave and keep coming back. I asked Kenji if this was made in-house, and his answer was yes. Then again, the location of their commissary remains a secret. Good thing I don't have any budget to hire a spy. For now, I just want to eat all the noodles on my ramen bowl.

Aside from all the things I indicated on my previous article, Ikkoryu Fukuoka Ramen maintains that same taste and quality which I have encountered the first time I tried their ramen. This is something that a lot of food establishments should be able to master, most especially if authenticity is the name of the game. 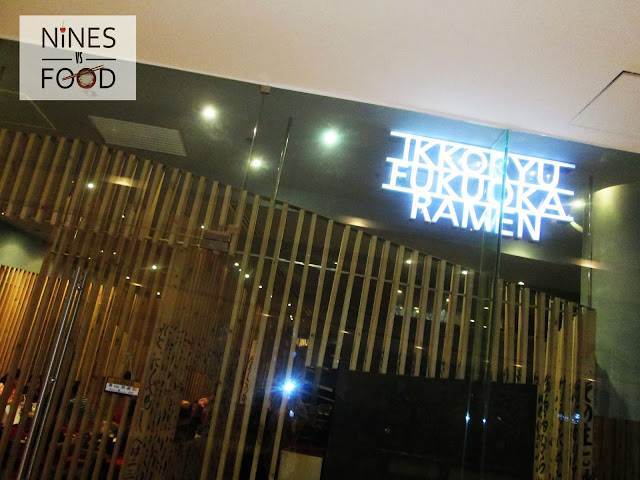 I recommend Ikkoryu Fukuoka Ramen anytime of the year, but it's always best eaten during a cold rainy day, when you need something to warm you up or when you feel stressed. Surely, this is one of my most favored comfort foods ever.

Most especially, it was a pleasure meeting passionate people who are not born on our native land but have fallen in love with our country and its people. Thank you for Ikkoryu Fukuoka Ramen arriving to our shores.