By Nines Licad December 01, 2013
Eastwood and Libis peeps! I am cordially inviting everyone to check out Gerry's Grill Eastwood at Citywalk 1. Gerry's Grill proves that they are not stopping anytime soon, as they have been continuously striving hard to reach out to their loyal patrons. And with over 50 branches worldwide, we are now down to the 53rd branch, which is conveniently located in Eastwood City, one of the most popular business hubs in QC. 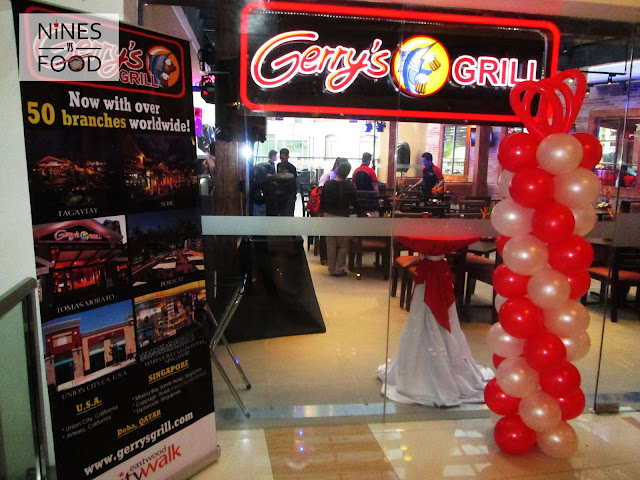 The new Gerry's Grill establishment in Eastwood opened its doors to the general public last Tuesday, November 26, but I got the chance to check out the place the day before when I attended their grand opening night along with other reps from the press, sponsors, bloggers, loyal patrons, business partners and other sports celebrity guests. This is a second time for me since I have was already invited during their opening night at Lucky Chinatown Mall in Binondo, Manila a few months back. 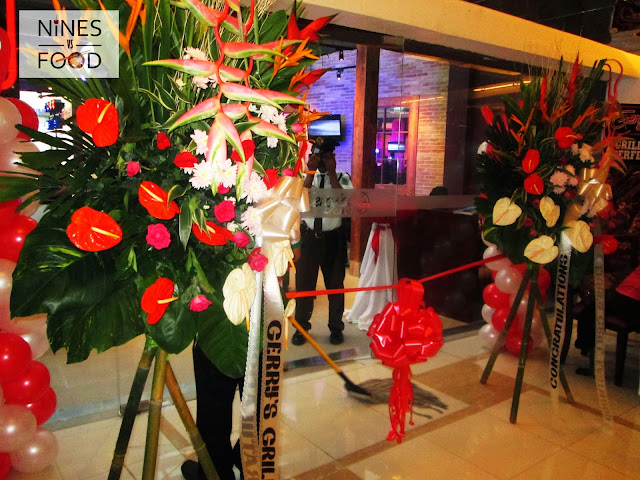 I was actually pretty early when I arrived at Gerry's Grill, but instead I went out and strolled for a while, and even met a few high school friends of mine with whom I ordered my alumni high school shirt. For my schoolmates who were not able to know about this yet, you can check out the official Facebook Page of our SJA Alumni Shirt here.

Another reason on why I decided to take a stroll first is having to miss Eastwood, as I have worked there for a number of years and having to come back makes me reminisce taking lunch breaks with my work friends and chill out sessions at our favorite hangouts around the area.

I was just in time when I came back that the ribbon cutting just commenced, and it's nice to see all the happy faces inside Gerry's Grill. They had a host that night who was extremely hyper that she infected everyone with the excitement about the opening. After the mandatory opening ceremony of cutting the ribbon and throwing coins inside the place, I decided to take pictures around the restobar. 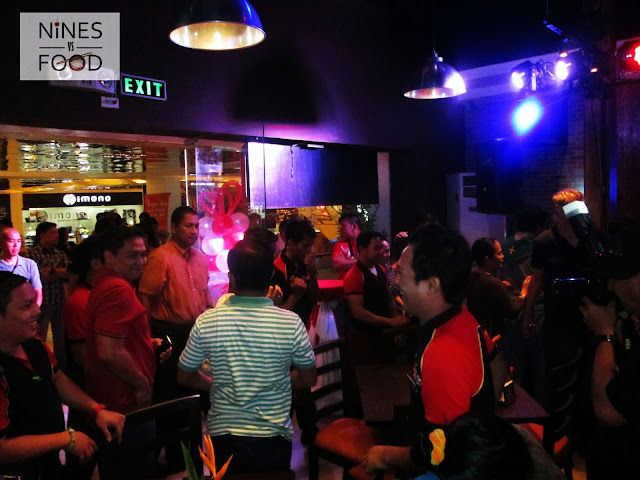 I can say that my Eastwood City familiarity skills is pretty good (especially when spotting new food joints hehe) but little did I think that Gerry's Grill Eastwood would be situated in such a spot at The Citywalk 1. Usually, when passing by the second floor after taking an escalator, the spot where Gerry's Grill was situated used to be a wall. I didn't know that the spot would be utilized extensively to place an establishment. 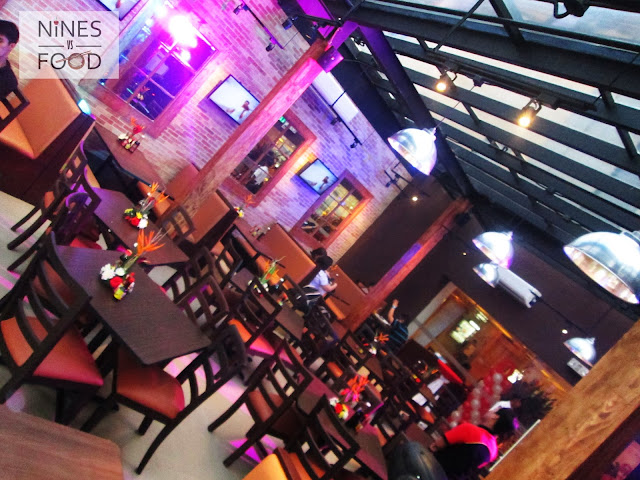 Apart from the very impressive rustic design on the dining area, the place was so big inside that they were able to put up this bar, which is neatly located at the left side from the Gerry's Grill Eastwood entrance. Complete with LCD TVs, this bar is also a smoking area. I personally think that the elements featured here Gerry's Grill Eastwood was quite like their branch at Tomas Morato (near ABS-CBN), which is one of my favorite hangouts because of their great food and affordable bottles of cold beer. 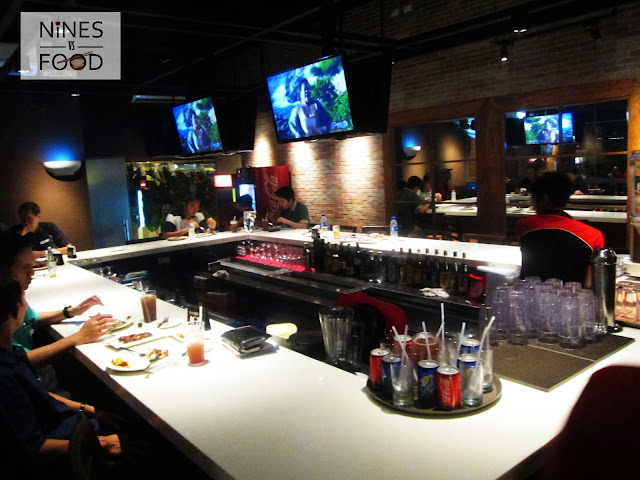 I was also shocked when I saw this long stretch of Al fresco area at Gerry's Grill Eastwood. I'm loving the place so much that I already imagined myself drinking at the Al fresco area. 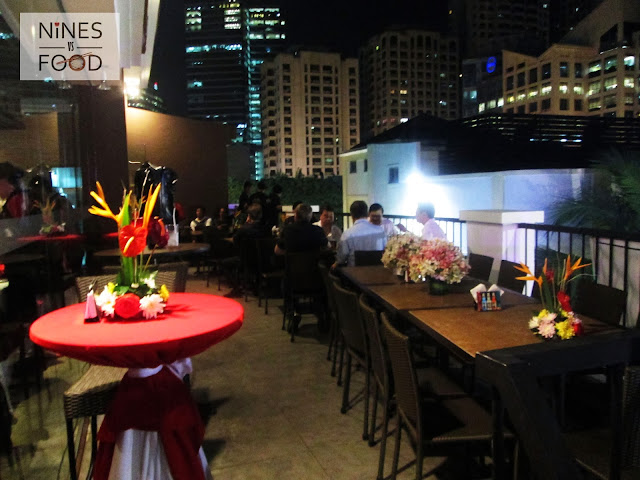 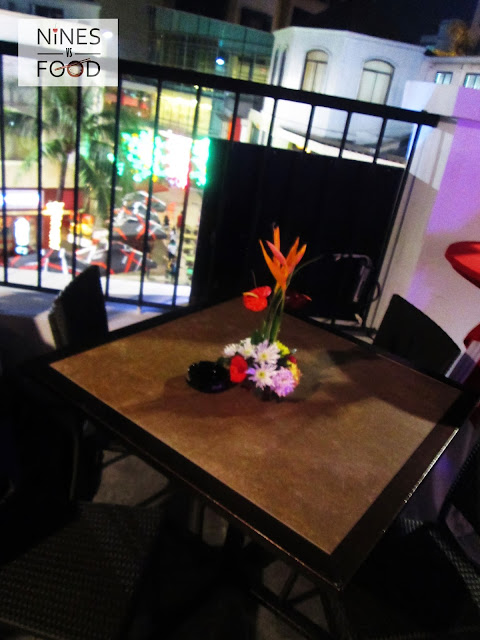 Of course, no Gerry's Grill opening night is complete without the food, and the booze! Mounds of Gerry's Grill specialties were being served for all invited guests, and this is of course, something I did not miss, starting off with some Vegetable Rice, topped with shredded carrots, green onions and fried garlic bits. 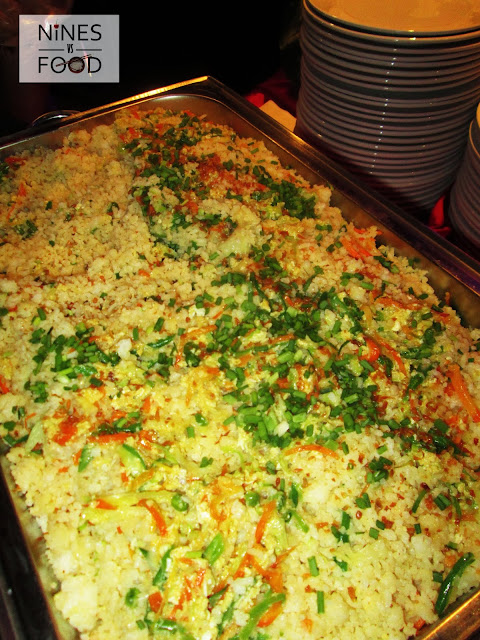 Gerry's Grill Eastwood also served Chicken and Pork Barbecue, which is best served with their special Gerry's Grill Inihaw Sauce. I have raved about their inihaw sauce on my previous post when I attended their grand opening at The Lucky Chinatown Mall, and I am happy to report that the yummy barbecue taste hasn't changed at all, and is available in all of their branches. 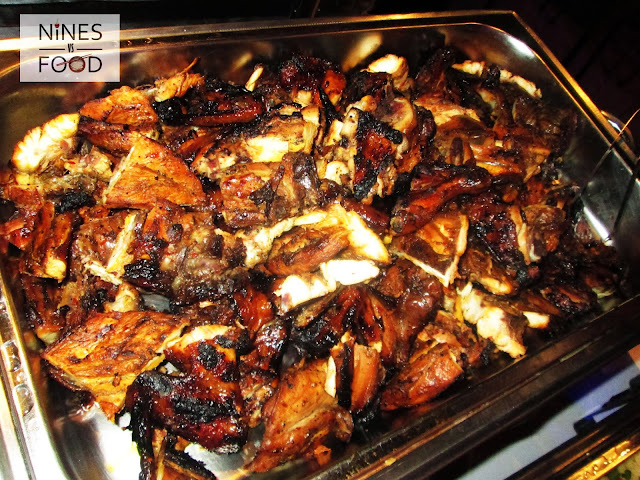 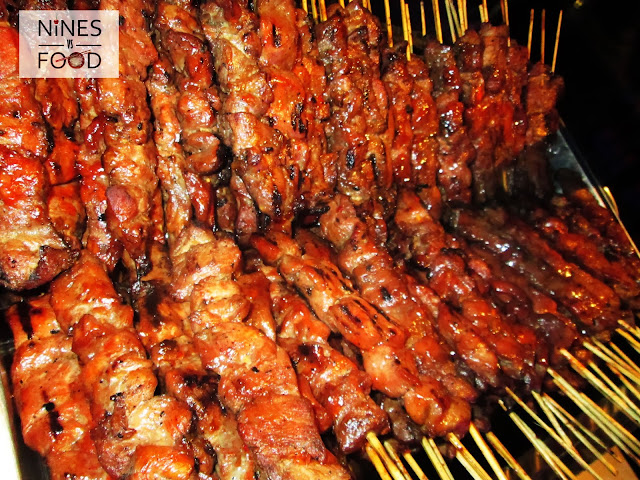 It was the first time to try Gerry's Grill Eastwood's Pinaputok na Cream Dory. This is made with cream dory fillets with an colorful array of veggies such as garlic, tomatoes, onions and leeks plus spices. The baking process added a little bit of char to the dish, as compared to the usual steaming of fish. It's a healthier alternative if you want to veer away from the pork and meat dishes being served at Gerry's Grill. 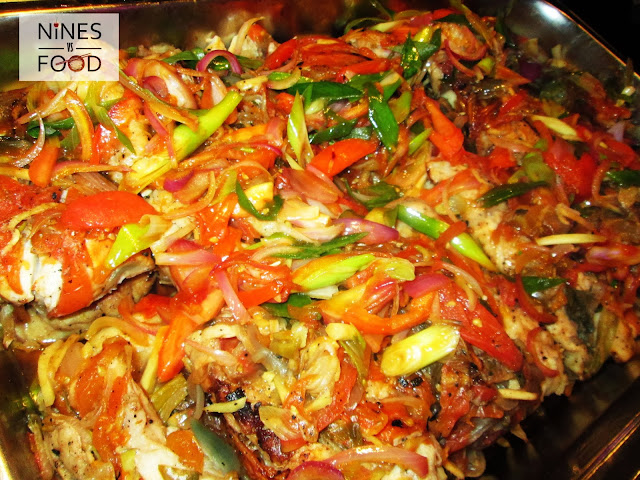 More healthy alternatives came my way with Bulanglang, a provincial dish of sauteed vegetables which is not far from your usual pinakbet. The only difference is that this one uses a lot of green vegetables. 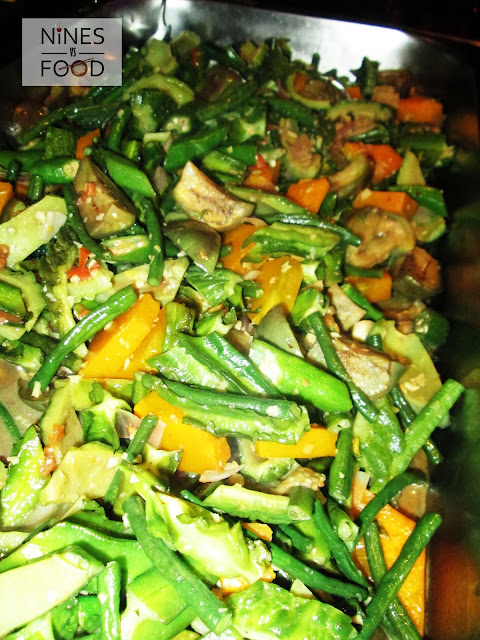 No opening night would also be complete without Gerry's Grill Eastwood's Pansit Palabok and their cheesy Beef Kaldereta. 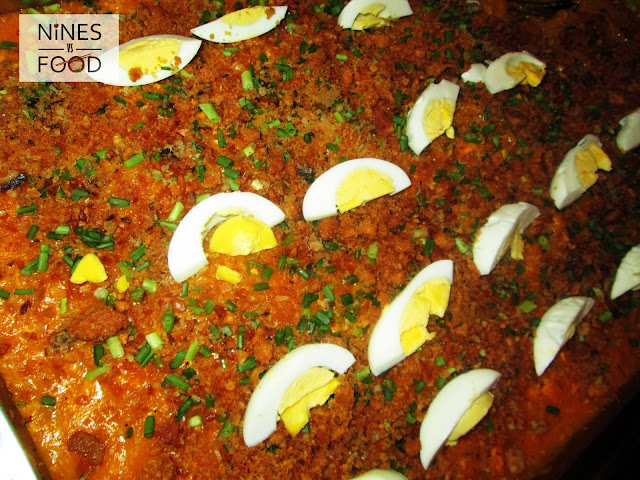 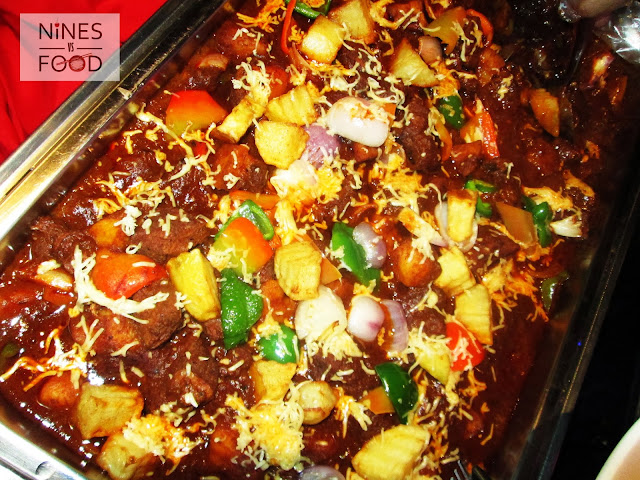 I am impressed with the great location, and I personally have loved the food at Gerry's Grill. But what's also very exciting that night is that they also had a raffle where some guests had the chance of winning goodies from Gerry's Grill and San Miguel Corporation, just like these inflatable buckets, GSM Blue Bottles and Antonov Vodka Bottles. Too bad I had to leave early because even the the night is still young, my usual night is still younger since I had to wake up early next morning for work. 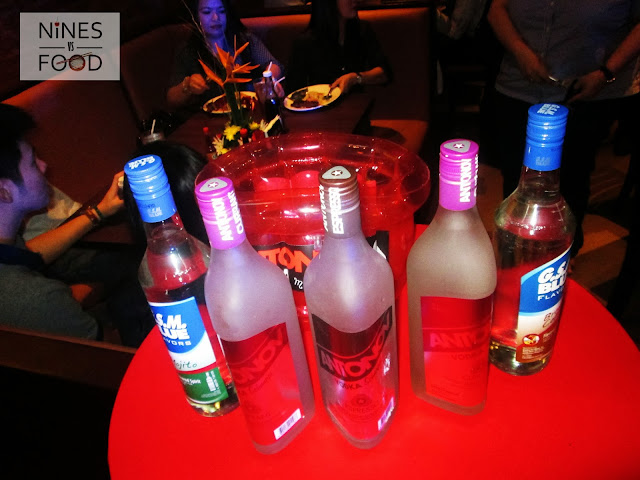 One of the things I find very fascinating during the opening night is the compilation of old school songs being played on all the LCD TVs being situated around the walls of Gerry's Grill Eastwood. As far as going to their other branches, this is a first for me since what I usually see on their other branches are usually songs from the latest music charts. But I'm pretty sure a lot of the guests during this time sang over some favorite throwback classics being shown onscreen. I'm really happy because now I can get to at a place I like without thinking twice whenever I'm in Eastwood. I am planning to come back one of these days though, esp. since Gerry's Grill is just one floor below the Eastwood Cinema, where I can hang out either before or after watching a movie.

Gerry's Grill is open from 11:00am to 12:00mn. And to enjoy your visit, they currently have a promo of getting a free dish for every minimum purchase of P500.00.

For more info on Gerry's Grill Eastwood as well as their other branches, including menu, promos and updates, check out their official account:

*Disclaimer: The following post is entirely made from the writer's own thoughts and views on Gerry's Grill Eastwood.