By Nines Licad August 05, 2013
Mercury Drug Corporation has been established as one of the iconic success stories in the Philippines. Before they have grown to 700 and counting owned and franchised drugstores in the country, the visionary Mariano Que started selling medicines in individual pieces and miraculously turned his humble beginnings into an empire. And take note, he only started the business with 100 pesos. It was big during 1965, but hey, the said value is now compared now to just buying lunch or dinner.

Fast forward to 2013, one of the people behind Mercury Drug, Chef Jessie Sincioco, now owns one of the most exciting dining spots in he country. With her signature culinary flair, she became the first Filipina pastry chef, and already made her mark with owning two renowned restaurants in Makati, the Top of the Citi by Chef Jessie and Chef Jessie Rockwell Club. And now, she ventured to a whole new level. The 33rd level, that is.

Mercury Drug Corporation's first high rise building in the north, called MDC100, is now the new home for Chef Jessie's newest challenge. Named 100 Revolving Restaurant, it's a fine dining chateau dream which rests on the topmost 33rd floor of the MDC building. The best thing about it? It's just floors away from my new office :)

Now, the food at the 100 Revolving Restaurant is a far cry from what and where I use to eat. I've been to a lot of restaurants, even at hotels, but this one is simply one of a kind in Manila and the rest of the Philippines.
As of today, they are still on soft opening, but when I visited 100 Revolving Restaurant  prior to the time I finally tried it, I was stunned.

It was an afternoon and as soon as I entered 100 Revolving Restaurant, the restaurant was formed with a revolving floor which occupied the venue perimeter. The tables on the middle of the resto does not move, but the highlight is the revolving sides of the restaurant. As much as I am having a hard time explaining it, it's just like in authentic Japanese fastfood style sushi bars where you get your food straight from the conveyor belt. The difference is that the tables where you get to sit on is situated on a huge conveyor belt. In short, you are the sushi. Hahaha! :)) 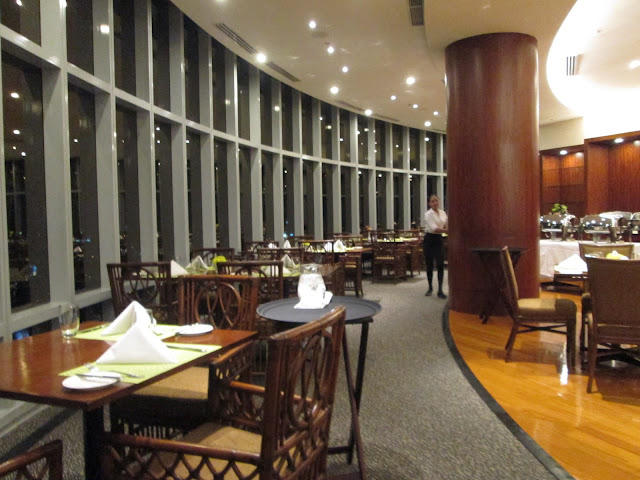 Anyway, I am not the best person when it comes to fine dining, but all I can say is that this is a new thing for me. Having to see a 360-angle view of the city while eating, without having to stand up my chair is amazing. And that I think is always a great experience to have anytime of the day.

And speaking of experience, the food was by far the most expensive that I ate. Maybe, the rich can very well make this as a regular thing. Personally, I can only do this on very special occasions. But let me get back on this in a bit. 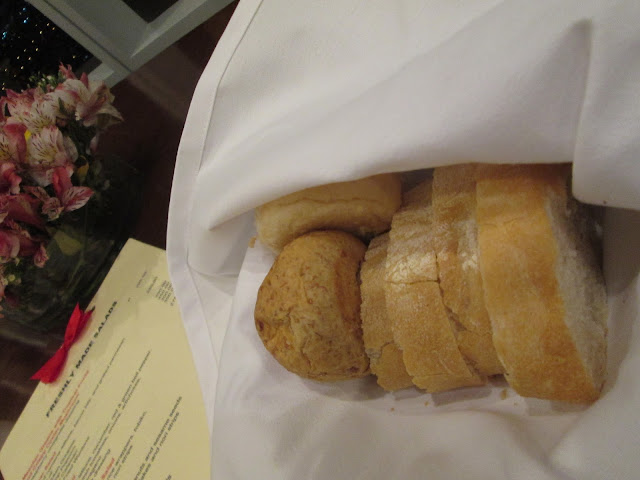 So there I was with five of my new officemates, wherein we decided to share our orders because they are good for two anyway. After eating a hefty servings of bread in baskets with butter and olive oil/pepper dip, while chatting away as we revolve ever so slowly around the resto, we finally got our orders. And my camera's battery finally died, so forgive me for the poor quality photos below. Also, the dishes below (except for the sushi items) are actually divided to two plates so we can share all the dishes.

The california maki is just the usual, except for the extra serving of salmon roe on each piece. But we all loved the tuna maki better.


The Chicken Cordon Bleu is savory with a hint of tang with the sauce underneath it. The salad and potatoes serves as great accompaniments to bring balance to the dish.


As for the beer roulade, I find it a bit on the dry side. It would be better if they didn't cook it all through. I would prefer if it was going for a medium rare state, but it was quite unsuccessful, or at least it's just me.

The baby back ribs is sweet, and along with it is a very indulgent serving...of atchara (pickled papaya). For 500 pesos, we got 4 pieces of ribs, a lot of atchara and greens. Hmm, enticing, but quite limited for an expensive price.

All the dishes are stunning and very much intimidating on my palate, but I think that the food serving was a bit of a downside for me. I used to eat at food joints with big servings, and the place did not bring much justice despite the prices. But anyway, this doesn't mean I cannot recommend going 100 Revolving Restaurant. Simply put, I think that I am just not their right target market.

But I would love to come back and have coffee and cakes sometime :))

Still, the 100 Revolving Restaurant is a gem that we should be proud of. Imagine, this worldwide trend is back in Manila (previous locations are in Manila--at the now closed Manila Royal Hotel, and in Pasig which is now Pasig Markets' Admin Office) and I do hope this stays for a long time. I highly recommend this to those who wanted to see the full 360 degree skyline of Ortigas and Quezon City, and for those who are quite into the lavish and the elegant.