My First Time at Quiznos Eastwood

By Nines Licad January 06, 2013
I am sharing to you my first time eating at Quiznos Eastwood. Having to work there in Eastwood City for years already made it difficult for me to choose what food to eat during my lunch breaks. This is evident because whenever there is something new to offer such as a new food joint on the area, we immediately take our chances to try them. But more importantly, it was simply a game of whether or not that place is worth coming back to or not.

So there was this new place called Quiznos located on the side of the newly constructed Techno Plaza Two Building and it offers a healthy sandwiches and rice meals. Looking at their logo, at first I thought Quiznos Eastwood was a pure Italian sub shop. But as soon as I got pass the entrance to look at their menu, I realized their menu was adjusted to the Filipino palate instead (Pork Adobo Sandwich should ring a bell).

As a critic, I couldn't really get out of another sub shop on my mind. Somehow I just wanted to know if this is Quiznos Eastwood better than Subway.

When we got inside Quiznos Eastwood and as soon as it was my turn to order some food, a smiling cashier greeted me. Good start. So I told her I wanted their flatbread sandwich and she says it's out of stock. So much for a good start. She instantly recommended their bestsellers (or in my mind, the most expensive items on the menu) but I hesitated. My budget was supposed to be below a hundred pesos and she gives me an item that's more expensive? It took awhile for me to finally decide on what to order. I wanted to order their subsliders, but the cashier gives me this reaction that the subsliders are just two small, almost pandesal-like sandwiches. What's up with that? I asked myself, did she think that subsliders are not enough for a girl like me? Hahaha. My goodness.

With the pressure that is slowly taking on my part (about two people are standing in line behind me), I went for their Traditional sub (finally!). But it took a few second later for me to tell the cashier I wanted their Classic Italian sub instead. Why? because it was late when I realized their traditional sub had chicken and chicken is the last thing I would want to eat during that time. Ugh, I hate having allergies.

Ordering at Quiznos Eastwood became a venue where I had one of my longest conversations with a cashier. And you know what? After my quick change in order, she was still smiling and actually replayed the whole ordering thing. "So mam, what would you like to have?" I just said my order, what's with the repeat?

Although I just thought maybe she just wasn't able to hear me clearly because of their loud music. I can feel the people standing in line next to me rolling their eyes and maybe telling themselves, "oh please...can you just get on with it?!" 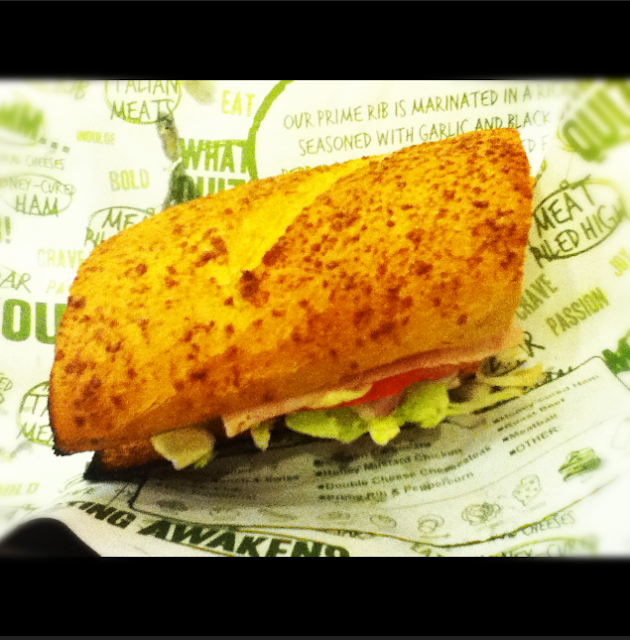 For P125.00, despite the slow start on their counter, it was a few minutes later that I got my order. Finally, time to eat. At first bite, I can taste everything. And when I say everything, it's their bread which stood out. At the same time, confirmed by my officemate who ate there with me, the sandwich poorly arrived at our table with only one slice of tomato. Sad but true. And, somebody correct me if I'm wrong, but I think their lettuce are sliced like that of the sandwiches being offered at McDonalds. 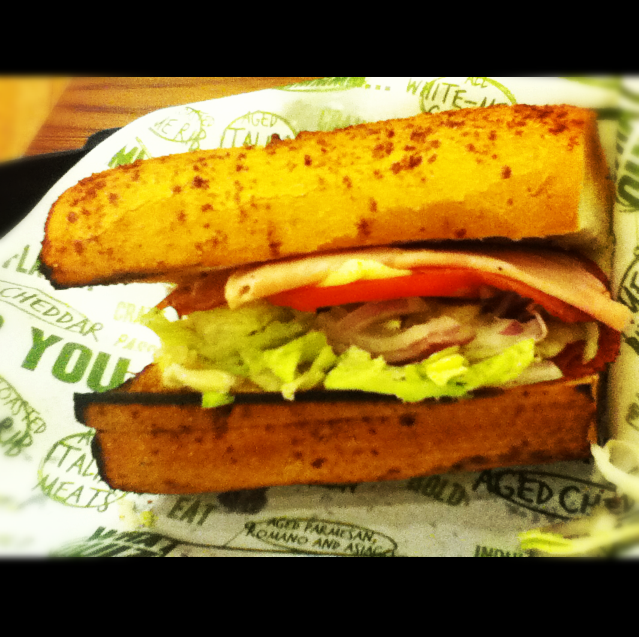 On the brighter side, Quiznos offers bread that is softer even though it's toasted. Plus I love their cheese. And their sauce too, which resembles that of ketchup when you eat hotdogs or burgers, but Quiznos Eastwood offers a sort of a mildly hot barbecue sauce. I actually think their sauce would be great for pork ribs.

After that last bite, I figured that eating at Quiznos Eastwood during that time was actually more expensive for me. Maybe it's because of the generous portion of bread on their subs. Maybe it's because it's new. Or maybe it's because they have this awfully loud in-house music inside and outside, thanks to their improvised dj booth playing loud music just outside the store. Talk about promotion. It's loud and it made me cranky while eating there because it was like I was having dinner in a bar or something.

Although yes, maybe they are still adjusting to the Eastwood crowd. I myself need to understand that they just opened and maybe soon they'll improve their way of service. And as a business, it always has it's flaws. And with that in mind, Quiznos deserve another chance. I just hope the next time I would have better service and additional tomatoes on my sandwich. Or I can just try ordering their rice meals I guess.

For more information on Quiznos, feel free to check out their official Facebook page here.